Back To All Posts

A dash of street smarts and a slice of Southern charm prove to be winning ingredients in life and real estate.

With traces of a Louisianan accent, Sandra Sanders speaks excitedly and intently as she describes the new RE/MAX Estate Properties office building in Manhattan Beach.

“We wanted a presence in downtown Manhattan Beach. When this building became available, we decided to buy it and create a boutique-style office space similar to a hotel lobby,” she says. “It has a dual-purpose bar that allows agents to work there with their laptops. It’s also great for social events. We’re very excited about our future here.”

Nationwide, the real estate market is still making a cautious climb back from a global recession. Not daunted, Sanders, owner (along with her two sons) and founder of RE/MAX Estate Properties—with 17 offices spanning Palos Verdes to Beverly Hills, has hired 80 new agents this year. With sales between $50 and $70 million per week, the company is ranked one of the leading real estate offices in the nation, with overwhelming market share in the South Bay.

Lucky perhaps, but her self-described “street smarts” and “extremely intuitive” nature surely haven’t hurt. “I have always just kind of known what we should do before we do it,” she says.

Those keen instincts could be traced back to learning how to stand on her own feet from a young age. After her father passed away when she was 9, she and her mother, who suffered from epileptic seizures, managed in their small, Deep South hometown of Minden, Louisiana, with no other living relatives to help out.

With a job opportunity at Union Carbide in Torrance, the couple, their three children and Sanders’s mother, moved to Southern California, where they settled in Rancho Palos Verdes. After the kids started school, Sanders had a lot of time on her hands and felt “unproductive.” Her husband suggested she study to obtain her real estate license.

“The secret to real estate is generating leads, staying in contact with people and giving good service. I worked really hard and had a creative fire in my belly,” Sanders says. 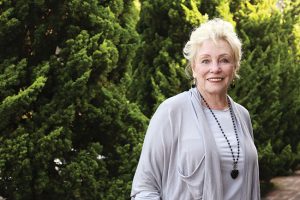 After eight years in the business, she became manager of the new residential sales division of Montgomery Company in Rolling Hills Estates. Four years later, she became co-owner of RE/MAX Palos Verdes. In 1987 she became the sole owner of two RE/MAX offices on the Peninsula and captured 50% of the PV Peninsula market share. She also acquired 10 local competing real estate companies. With the help of her sons, James and John, she extended their service area to the Westside, and renamed the company RE/MAX Estate Properties.

Upon Glover’s retirement from Union Carbide, he went to work in her accounting department until his passing in 2009.

Together Sanders and her family have grown the company to 600 agents and $3 billion in sales. In 1990, Sanders started an independent escrow company, Peninsula Escrow. She is also a partner in Progressive Title Company, which services Los Angeles County.

According to daughter-in-law Julie, Sanders’s unselfish nature makes everyone feel like a part of the family. “I have known Sanders for 30 years. She is loyal and generous with her time, talents and means to anyone with a need—whether they ask for help or not,” Julie says.

When Hurricane Katrina devastated New Orleans in 2005, she challenged employees to raise money for recovery efforts. They donated $35,000, which she matched. She then encouraged her husband to bring Union Carbide employees in on the act, which grew the total to $140,000.

RE/MAX Estate Properties donates a portion of each home sale to Children’s Miracle Network. Through the years, it has also fed 4,000 people at Thanksgiving, regularly donated toys to children at Christmas and Easter, and hosted a children’s petting zoo.

Recently, good friends Harv and Ruth Daniels began speaking to Sanders of their involvement as Patrons of Torrance Memorial Medical Center. Ruth, a former employee of Sanders’s, invited her to attend the Holiday Festival Fashion Show. It was there that she took notice of the new Main Tower construction. A hard-hat tour led to a greater appreciation of its new, modern facilities and convinced her to become a Patron.

“The design is extremely efficient and lends itself to the benefit of the patients,” she says. “I am so proud to be involved with something that is so important to our community.”

Sanders is a long-time supporter of the Norris Theatre, having served on the board of directors for six 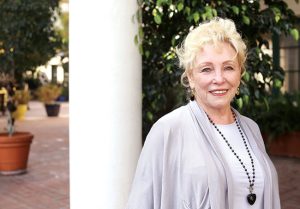 years. She has also served on the advisory committee of the YWCA and has supported PV Art Center, Rainbow Services, Marymount College, Children’s Hospital, and the fundraising campaign to build the new St. John Fisher Catholic Parish in Rancho Palos Verdes.

Her contributions led the Palos Verdes Chamber to recognize her last month as Citizen of the Year. “When you mention Sanders’s name, faces light up,” Eileen Hupp, president and CEO of the Palos Verdes Peninsula Chamber of Commerce, says. “As we reviewed nominating submissions, mentioned time and again were her passion, integrity and honesty, along with the breadth of her philanthropic efforts, which extend beyond our local community.”

No longer selling real estate, Sanders now devotes her energy to growing her business, as well as spending time with her seven grandchildren and one great-grandchild. She also enjoys traveling, river rafting, skiing and golfing (she recently made a hole-in-one at Harbor Park).

Although in one of the most desirable and competitive real estate markets in the country, Sanders doesn’t concern herself with her competition. Instead she looks forward, relying on the instincts and Southern values that have served her in good stead.

“Being from the South softens the demeanor. It makes people feel more comfortable,” she says. “What people really want to know is that you’re compassionate, down-to-earth and that you care for them.”

For Sandra Sanders, it’s a down-home recipe that continues to prove successful—both in life and in business.